Hello
I am Sem Habtemariam

I want to represent YOU on the Carrolton City Council.

I chose Carrollton as the place I have called home for more than 21 years, and it is where I chose to raise my children. The time has come for me to give back and serve Carrollton and I would be honored if you support my candidacy to be the next councilmember for Place 1.

“We the people of the Unites States, in Order to form a more perfect Union, establish Justice, insure domestic Tranquility, provide for the common defense, promote the general welfare, and secure the Blessings of Liberty to ourselves and our Posterity, do ordain and establish the Constitution of the United States…” (Preamble of the U.S. Constitution) 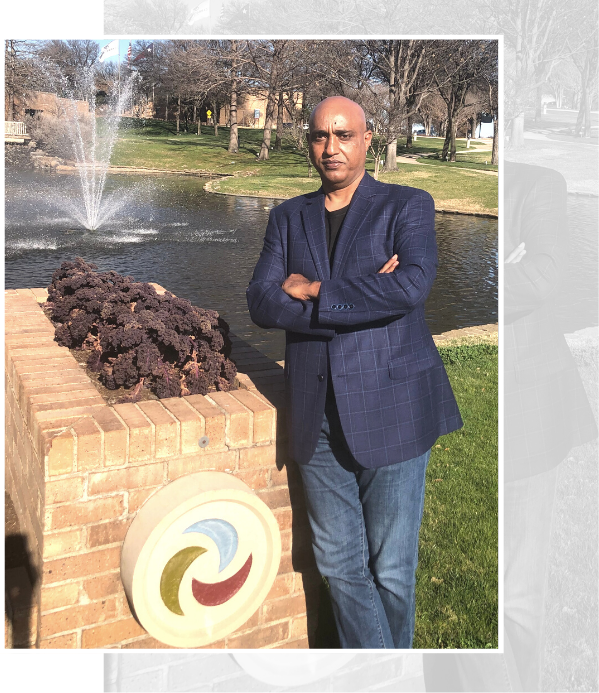 Why should you choose me over the two other candidates asking for your vote for Place 1?

I am fiercely independent, and beholden to no interest group. I answer only to Carrollton’s residents, our valued businesses and, of course, our city’s employees.  I would strictly adhere to the spirit and letter of the two-term limit as stipulated in our charter. My creativity would be vested in finding innovative solutions to the problems our city faces and not in finding loopholes to run for a third term. My vision for Carrollton is to be the city of choice where people and businesses proudly call home and where the diversity of our communities is reflected in their local government. All voices must be heard because diversity matters. I am ready to routinely invite fresh and diverse perspectives from our diverse communities and serve all of Carrollton’s residents and stakeholders.

Like many people in Carrollton, I am also an immigrant, and it is my privilege to call America home, to call Texas home, to call Carrollton home.  I have sown deep roots in this community, and it is time I stand up, answer the call of duty, and serve the people of my community.

A bit about my background

I was born in Wekiduba, a small idyllic village near Asmera, the capital city of Eritrea. In February 1975, when I was five years old, the army of the communist regime of Mengistu Hailemariam of Ethiopia descended onto our village like a dark, ominous cloud. Over 100 innocent people were massacred, many of whom died inside the Koskam Church where they were hiding and praying. Ironically, the church is named after the cave in Mount Koskam, Egypt, where, according to the history of the Orthodox Tewahdo Church, baby Jesus and family sought refuge from marauding thieves.

This momentous event left an indelible mark in my psyche and transformed me forever.

My father joined the war to fight for Eritrea’s independence, and the rest of my family and I were internally displaced. In 1977, the Eritrean liberation fronts made great headways and almost liberated the entire country. However, in 1978, the communist regime of Menghistu Hailemariam, armed by the former Soviet Union and supported by about 15,000 Cuban soldiers, reversed the Eritrean gains, and took control of most of the once liberated areas of Eritrea.

I attended first grade in Mendefera, but because of daily air-bombardments, my classes started at 7:00 PM and ended at 11:00 PM. During the daytime, we took shelter in the many dugouts in the city or the dense trees near the river of MayTekela. It was our new normal and against all odds we made the most out of it. It was a time of irony where one sees flashes of mercy amid omnipresent cruelty, and rare human beauty amid its shocking deformity.

Once again, my family and I were forced to flee a city we had called home for about a year and seek refuge in the Sudan. We became refugees.

But all this did not prepare us for life in the Sudan. The precariousness and vulnerability of life as a refugee coupled by the concomitant economic hardships and the culture shock, we experienced was more than we could bear.

Life in the Sudan was tough, and the notoriously corrupt police and security personnel took advantage of hapless refugees, but the Sudanese people could not have been nicer. I loved the Sudanese people but hated their governmental system. Getting a permit to travel from one city to another was a Herculean task. Bribery circulated in the Sudanese government like blood circulated in the body. There is nothing I hate more than bribery. Perhaps it is for this reason, the Bible exhorts us that, “You shall not take a bribe, for a bribe blinds the clear-sighted and subverts the cause of the just.” Exodus 23:8

The Eritrean liberation organizations came to the rescue of many Eritrean children and youth in the Sudan and through its partnerships with the Catholic churches and the United Nations High Commissioner for Refugees (UNHCR), provided   K-12 education. It was in these Eritrean-run refugee schools that my siblings and I attended school.

The pursuit of higher education and better employment opportunities, beyond menial jobs, was out of reach for most refugees, and after graduating high school, my older siblings became victims of this hopeless situation.

During my junior year in high school, my older sister renewed an application she had submitted in 1981 for the US Refugee Resettlement program. In 1981, we had been invited for an interview, but my father, the freedom fighter, was still alive, and both of our parents were adamantly opposed to any kind of emigration that would take us beyond the Sudan. Their dream was to take us back to Eritrea and reclaim their old lives.

Refugees are not immigrants and their dream of going back never dies; but often, they never return, and the dream dies with them.

Thanksgiving week of 1989, my family and I arrived at the DFW airport from Khartoum, Sudan. It was a long flight but totally worth it because it brought us home, our new adopted home.

Our journey was made possible by the Christian World Church (CWC) and an Ethiopian-American Muslim gentleman, who was our local sponsor. His name is Mr. Ramadan Salim, and no one was happier than he when I told him I am running to be a Carrollton City Councilperson.

America has been good to my family and me. I started taking classes at El Centro Community College, two months after I arrived in the US. After earning enough hours at El Centro, Richland College and Brookhaven, I transferred to the University of Texas at Dallas and finished a bachelor’s and master’s degree in Government and Politics and Public Affairs, respectively. I pursued a PhD in Political Science at the University of North Texas. Perhaps, one day, I will go back and finish it.

In 1992, while attending UTD, I went to play soccer at a tournament in Atlanta. As luck would have it, I met a beautiful young lady in the elevator. I introduced myself and asked for her phone number. A few hours later we were deep in conversation as if we had known each other all our lives.

Two years later, we were married in Arlington, Virginia. Yodi Askale is my best friend, my wife, and the mother of my four children. Our oldest son, Mike, graduate from Baylor University and now attends medical school in Arkansas. His younger sister, Mel, graduated from UNT with a bachelor’s degree in mathematics. Dlet is a freshman studying Computer Science at UTD, and the youngest, Blen, is a 9th grader at Hebron High.

I ask for your vote and your support.

Sem was born in Wekiduba, Eritrea and at the age of five, he was forced to flee his hometown and seek refuge in neighboring Sudan. As part of the US Refugee Resettlement program, he came to the United States on Thanksgiving 1989. He has been a resident of Carrollton since 2000. He received his Bachelor of Arts in Government of Politics and master’s degree in Public Affairs from the University of Texas at Dallas. He has also completed all courses in Political Science as a PhD student at the University of North Texas.

Sem is currently serving as a member of the Board of Trustees of the Orthodox (Tewahdo) Charity Eritrea, a 501C non-profit charity organization. OCE is the charitable wing of the North American Diocese of the Eritrean Orthodox Tewahdo Church. He is also serving as the secretary of its provisional leadership. https://www.tewahdo.org/

He served as a board member and CEO of the Forum for National Dialogue (Medrekh) from 2016-2019. The organization was established to promote democracy, rule of law and human rights in Eritrea.

Sem is the author of two books and numerous articles on the Horn of Africa. As an Adjunct professor and Teaching aid, he has also taught courses in American Politics, Texas Politics and Contemporary history at UNT, NCTC and DeVry University.

He has worked in various fields and held different roles ranging from branch manager, Sales & Operations manager in banking, mortgages, and Credit and as a consultant in RF engineering. He currently works at Inogen as a Sales Supervisor.

Sem has been married to his wife, Yodi Askale, for 27 years and has four children: Mike, Mel, Dlet and Blen.

© 2021 Sem Habtemariam | The political Advertising is Paid for by Friends of Sem (FOS).